In 2007, Arnold joined Manchester United as Group Commercial Director. He was promoted Group Managing Director and Director of Manchester United PLC on 1 July 2013, assuming control of the club's business operations, after Chief Executive David Gillwas replaced by Executive Vice-Chairman Ed Woodward.[4] Arnold sits on the board of Manchester United Television (MUTV) and Manchester United Merchandising Limited. During his time at the club, he has been instrumental in growing the global appeal of the Manchester United brand, opening commercial offices in Mayfair (London), New York City and Hong Kong.[5][6][7] Arnold has overseen the signing of a number of lucrative sponsorship contracts, including a world record 7-year $600 million (USD) kit sponsor deal with General Motors/Chevrolet (2014), and a $1.3 billion sports equipment deal with Adidas over 10 years (2015), the most valuable in sporting history 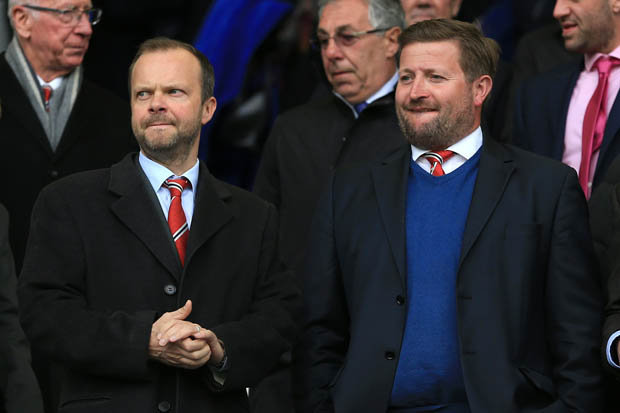 Manchester United fans have funded a plane with a banner to fly over Old Trafford an hour before Monday night’s with Tottenham. The banner will read ‘ED OUT – LUHG’, targeting the Executive vice chairman, while the initial are short for ‘Love United Hate Glazers’.

Ed Woodward’s view – and that of the Glazers – may be that after adding 10 outfield players (Zlatan Ibrahimovic came free and Alexis Sánchez was a swap) to the 20 frontline ones inherited, this is a Mourinho squad and it is time for him to focus on what he does have rather than what he does not.


When pushed for an answer on Manchester United’s lethargy, Mourinho said that City had played two “friendly matches” against Shakhtar Donetsk and Southampton. But matches against such opponents are only friendly if you are good enough to make them simple. United’s last result against Southampton? A 0-0 home draw.

These were not excuses, but exercises in expectation management. Mourinho’s critics might remark that his ability to deflect criticism has become the hallmark of his Manchester United tenure. Can’t compete? It’s the spending. Can’t defend adequately? Blame the defenders. Struggling to find attacking fluidity? Individuals are underperforming.

Mourinho is the dictator who loses faith in those around him until his circle of trust amounts to a circle of one. Infamy, infamy, they’ve all got it in for me.

Since both managers took charge at the beginning of 2016/17, City have taken 40 more points than United (+9 in that first campaign; +19 last term; +12 and counting so far in 2018/19). Guardiola has done an extraordinary job – and that remains true in spite of the revelations – in creating a team where the component parts perform in such symbiotic harmony.

Manchester United have fallen into a rut of mediocrity that would have caused his two much-maligned predecessors great embarrassment. To be behind Manchester City is no disgrace, but to be behind both Bournemouth and Watford having played almost a third of the season is unthinkable for this club.

Since the start of last season, United have collected fewer points than Liverpool and Tottenham. These are deeply unflattering comparisons, and yet still Mourinho pleads his own innocence. Expectation management doesn’t work when the manager of Manchester United is comparing his own side to Everton. A reminder: United have the third-highest wage bill in the world (behind Barcelona and Real Madrid) according to the most recent calculations. He is also responsible for the two most expensive signings ever made by an English club.