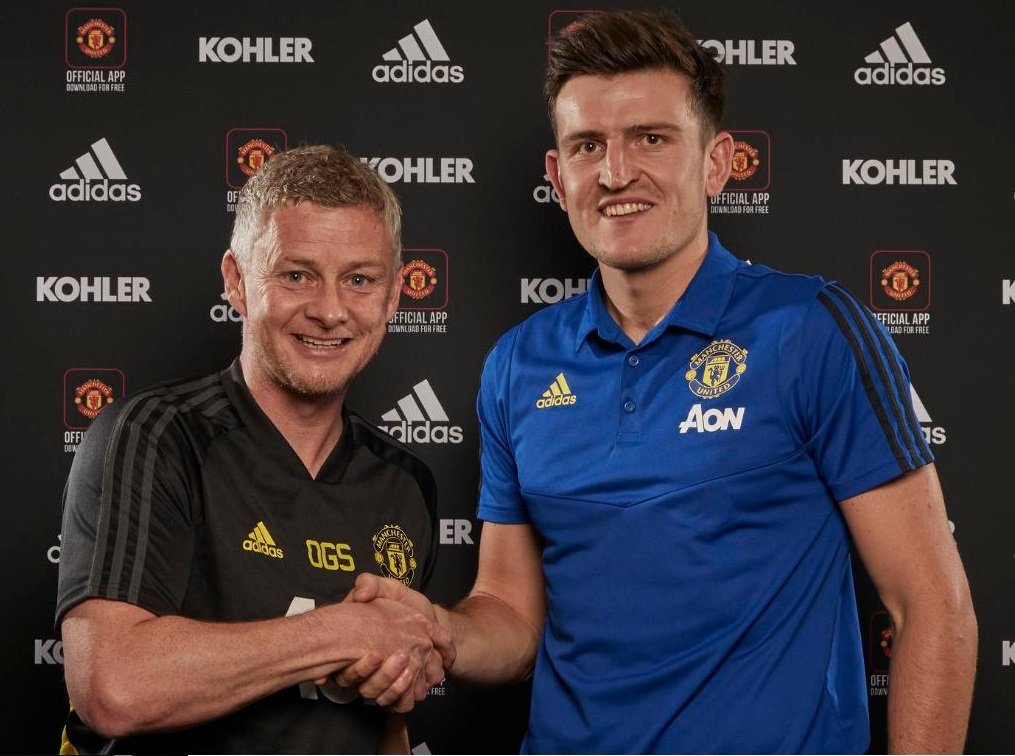 
Woodward was quoted £80m for Maguire in May and paid it in August: here’s what really happened in between

Almost as soon as last season finished the whispers around how much it would cost to sign Harry Maguire from Leicester City began. Word came from the very top at the King Power Stadium that respected agents’ valuations of £65 million were misguided.

Aiyawatt Srivaddhanaprabha, known as Top, saw Maguire as a statement transfer and let it be known that only a world-record fee for a defender would be palatable. Sources have told The Athletic that Leicester’s owner initially wanted £100 million for Maguire. The message was clear to interested parties, including Manchester United and Manchester City: Leicester had a strong hand and would not fold.

This left United’s executive vice-chairman Ed Woodward with a dilemma. Ole Gunnar Solskjaer had made it abundantly clear Maguire was his top target to elevate a mediocre defence, not only for his capabilities on the pitch but his presence off it. England and Leicester staff reported a grounded figure who possessed leadership qualities, the type of character United needed. Solskjaer also wanted business done early, so new signings could acclimatise to the club and his style of play during pre-season.

But Woodward felt he could not afford to simply pay up. It is understood he was conscious of the precedent that might set for negotiations on other recruits. He knew, however, that given City’s interest he had to make the first move early. So in late May he called the Leicester chief executive Susan Whelan.

Usually, Jon Rudkin, Leicester’s sporting director, would handle the negotiations but Woodward has developed an excellent professional relationship with Whelan through the Premier League summits that all club powerbrokers attend. Whelan would also be the one to host visiting directors in the Leicester boardroom, with Top’s father Vichai preferring to stay out of the way in his personal room adjacent. She struck up good rapports. A source says: “She is very welcoming, but also shrewd, organised, quick and intelligent.”

It is said that following Vichai’s death last October, Whelan, who is also on the board at King Power and frequently flies to Thailand, has increased her input on football matters, as a trusted aid for Top following a 20-year working relationship.

So Woodward picked up the phone, knowing Whelan’s influence.

That initial conversation gave United a clear picture of the actual figure required to get Maguire: £80 million to edge the £75 million that Liverpool paid Southampton for Virgil van Dijk in January 2018. Sources say the tone of that first talk also left Leicester with the distinct impression a deal would be done.

City, meanwhile, took a softer approach. Pep Guardiola wanted Maguire to replace Vincent Kompany and even approached the England defender on the pitch after City’s 1-0 win in the penultimate game of the campaign, expressing his admiration for his performance. Maguire was said to favour moving to the Etihad at this stage.

But City were aware of Leicester’s demands and kept their counsel. By the middle of June the word in agent circles was that Leicester had proposed a fee of £90 million, a figure City sources stressed they would never get near. City board members also had recent experience of Leicester’s approach to selling players, having needed two windows to sign Riyad Mahrez for a club-record £60 million the year before, even if City were ultimately happy with the deal.

City offered Nicolas Otamendi, whose wages were prohibitive, and Eliaquim Mangala, who Leicester had no interest in. Their indecision was such that at one stage they asked agents of other centre halves for their opinion of Maguire’s abilities. In the end they made a bid worth up to £70 million for the 26-year-old, but by July their pursuit had in effect been called off. United’s strong interest meant Leicester had absolutely no reason to lower their expectations on price.

Guardiola said of Maguire on Sunday: “(A) top-class player. We were interested but we could not afford it. United could afford it. Congratulations to United on this signing.”

The reason for United’s myopia was multi-faceted. Firstly, there was Sir Alex Ferguson. He had spotted Maguire’s potential at 17 after the 2011 FA Youth Cup final. Maguire played for Sheffield United against a side including Paul Pogba at Old Trafford but suffered a concussion that kept him in a Manchester hospital overnight. A few days later, Maguire received a call from a withheld number. It was Ferguson, who inquired about his health and told him that through hard work he could play at the top level.

Fast forward to the summer of 2018 and United were trying to take Maguire to that level after his displays for England at the World Cup in Russia. Former manager Jose Mourinho made his feelings clear, but his interest came too late for the club to make a proper bid.

This year, however, Maguire had a ringing endorsement from a member of United’s new management team. As Hull manager Mike Phelan gave Maguire his first Premier League start in October 2016, and found a player with an appetite to learn.

Maguire would often take residence in video suites studying clips of his performances and also asked about the defenders such as Rio Ferdinand and Nemanja Vidic, with whom Phelan had worked during his first spell at United. He took a particular interest in data from the GPS system, which tracks the distance a player covers.

Speaking last summer, Phelan said: “Harry was one who now and again wanted to know: ‘How did so-and-so deal with that? Why would I need to be in this type of position at this moment?’ It’s an education when making that jump. It was learning skills which weren’t his strength. When to stand still, when not to dribble out. He understood that.”

When Phelan left Old Trafford and was asked by senior figures at the club if any players were worthy of joining United, he said Maguire. Andy Robertson, now at Liverpool, was another name mentioned.

Solskjaer was a firm advocate too, viewing Maguire as a leader for his team, and repeatedly pressed Woodward to complete the signing. While maintaining public diplomacy, sources say that behind the scenes, as the days turned into weeks, Solskjaer became increasingly persistent.

United made an initial bid of £70 million once the players reported back for pre-season on July 1, but Leicester rejected it. Woodward then waited.

A fortnight later in a meeting with the Leicester manager Brendan Rodgers, Maguire expressed his wish to leave should the club’s valuation be met. The Leicester manager gave in. Maguire would continue to maintain professionalism, refusing to resort to going AWOL as Mahrez had when trying to force his move to City. That respect ensured that strong relations with everyone at Leicester were upheld. He made a point of playing in the first pre-season friendly at Scunthorpe on July 16, despite feeling unwell the day before, and would go on to feature in four warm-up games for Leicester.

Top flew from Thailand to attend the match at Cambridge United on July 23 and reiterated his stance. There is a sense that after his father Vichai’s death last October he viewed this as a crucial, legacy-defining episode that would illustrate that the club’s ambition remains undimmed.

During that time Maguire’s agent Kenny Shepherd, son of former Newcastle owner Freddy, and his business partner Paul Stretford, who counts Wayne Rooney as his most famous client, worked hard to mediate an agreement between the clubs. United’s chief negotiator Matt Judge was also involved.

Still Woodward resisted, determined to lower the price. Leicester could now, though, point to the £50 million fee that United paid Crystal Palace for Aaron Wan-Bissaka as testimony for their own valuation of a player of far greater experience. Maguire had played more than 300 career games (98 in the Premier League), won 20 England caps, and starred at a World Cup. Wan-Bissaka, while prodigiously talented, had only really had one full season of first-team football under his belt.

United did look at Tottenham’s Toby Alderweireld, Kalidou Koulibaly, of Napoli, and Bournemouth defender Nathan Ake, but these players have been described as “flirtations”. Solskjaer was committed to Maguire.

Towards the end of July, as the impasse continued, Maguire was said to let his frustrations show. United were verbally approaching Leicester’s valuation but a compromise was not forthcoming. Sources say Maguire felt his dignified approach, plus a gentleman’s agreement when he signed his improved contract last summer that he could go for a reasonable price, warranted Leicester conceding some ground. The player was geared up for a move to Old Trafford by this point and it was clear how much United wanted him.

This “minor sulkiness” is said to have manifested in one or two leisurely sessions on the bike at Leicester’s Belvoir Drive training ground, The Athletic has been told. But nothing more. In Maguire’s final Leicester game at Stoke City on July 27, informed observers reported an off-key performance.

When Maguire called in sick on Monday July 29, suspicions were raised. While Rodgers did speak of an illness after the Stoke game it suited the 26-year-old, United and Leicester for him to miss that day’s broadcast media session and pre-season walkthroughs with Sky Sports. Awkward questions or out-of-sync video footage when Maguire was clearly on the move would not have helped anyone.

Last Thursday Maguire held talks with Rodgers and both agreed he would miss the following night’s friendly against Atalanta. The mood music was very much that Woodward was finally prepared to push the button.

The next morning came the decisive word: an £80 million fee up front. By Friday afternoon Rudkin was finalising the exact terms, taking into account the 15 per cent sell-on fee owed to Hull on the profit Leicester would make on their £15 million purchase in 2016. Personal terms on a five-year (

) deal worth around £190,000 a week, more than double Maguire’s Leicester salary, were swiftly completed.

The contract is a huge sum and prompts a trickle-down effect. Burnley might now demand £50 million for James Tarkowski, a Leicester target, for instance.

But in terms of what United need, the money for Maguire could become irrelevant. He is a defender able to play the passing style that Solskjaer wants and brings a mentality for self-improvement, which should rub off on the younger players in the squad. A comparison can be made with Ferdinand, who cost £30 million from Leeds in 2002 and proved transformative for Ferguson.

Maguire certainly bore the look of a man content while driving out of Carrington after his medical on Sunday. He can ask former Leicester team-mates Danny Simpson and Kasper Schmeichel for advice on a place to live, with both former team-mates residents of Cheshire’s Golden Triangle, the affluent villages favoured by Manchester’s footballers.

There are those within the game, though, who feel the saga could have been wrapped up much sooner. United were aware of the trigger point and Rodgers was relaxed about Maguire’s departure from early on. But Woodward might well argue that United need to push back in such negotiations to limit the inflation that strikes whenever their name is part of the equation. After all, at least £80 million is not £100 million.