Mediapart alleges that the CFCB Investigatory Chamber, charged with investigating FFP violations, omitted a series of disturbing findings when trawling through Monaco’s finances, in their final report. Behind the scenes, Monaco are understood to have executed a successful lobbying campaign that included a Michelin-star restaurant experience in Monaco, after which the head of UEFA’s FFP programme agreed to help prepare the club for their CFCB Investigatory Chamber hearing.


The meeting is at the request of Jean-Luc Deheane, Belgium’s former prime minister and the head of the UEFA’s financial investigation team, who for the past few months has led a probe into Zenit’s finances; specifically, the nature of its lucrative sponsorship deals with its ultimate parent company, Gazprom.

The scale of the financial doping – a term used to describe the unfair advantages of having rich owners’ bankroll clubs – is not little. The documentary evidence, reviewed by The Black Sea, shows that in the past five years, since the introduction of fair play rules, the Russian state has injected over €1.65 billion into Zenit, Lokomotiv and Dynamo, through crooked sponsorship deals. And the practice continues today. 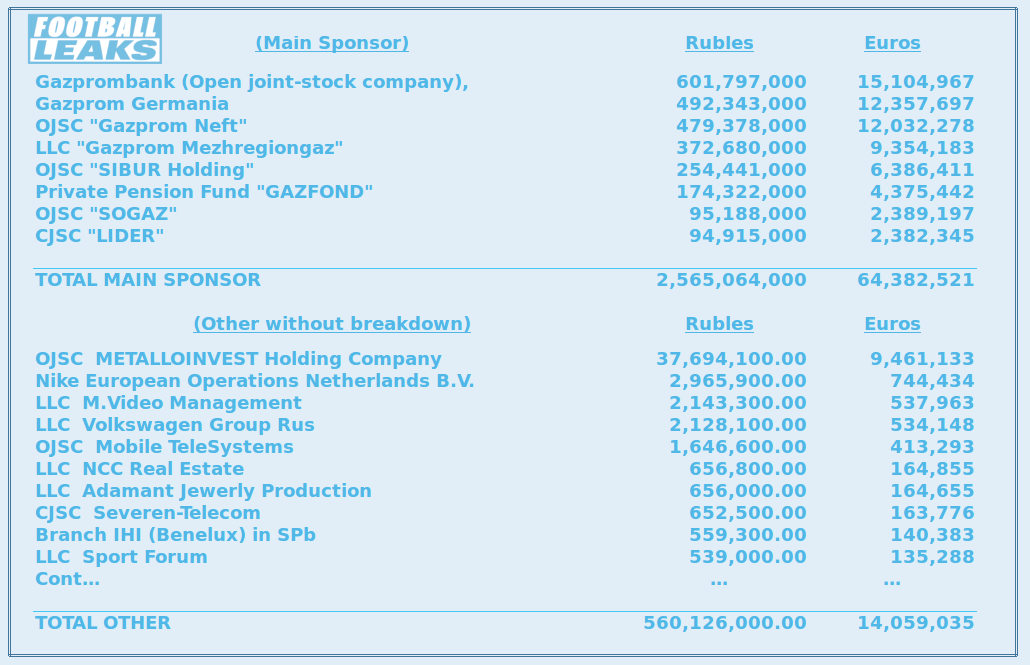 
These off-contract services listed in the letter also reveal the alarming extent to which Zenit and its players are beholden to its owners. The club permitted Gazprom a “number of exclusive hospitality services inaccessible to other partners”, such as visits to the dressing room, VIP tickets, and seats at official dinners and events. Zenit’s top players were even required to give birthday greetings to Gazprom staff, its partners and government officials, as well as watch live games with them, participate in photo sessions, and social programmes. They should even visit business offices to sign autographs.


The contract Guardiola signed with Manchester bears the date Oct. 10, 2015. The salary and bonus payments it guarantees are world class: In his first season, he was to earn 13.5 million pounds, a sum that would rise to 16.75 million one year later. But it's the timing that makes the signing of the contract so unusual: It happened when he was just two months into a new season at the helm of Bayern Munich. Both Manchester and the trainer said nothing publicly about the contract.


It shouldn't go unmentioned that in the end, one of the most influential player agents in the football industry also found a place at the table, his hand outstretched. It was the Portuguese agent Jorge Mendes, who almost by divine right, always turns up when vast quantities of money are at stake. On the morning the contract was signed, on Aug. 31, 2017, at 7:52 a.m. local time on the Côte d'Azur, Daniel Bique, chief legal counsel for AS Monaco, added the Portuguese's name to the transfer agreement. Mendes' fee: at least 7.25 million euros.

It seems possible that his contribution was that of playing up speculation that Mbappé would be transferred to Real Madrid as a way of driving up the player's price. There are documents in the Football Leaks trove that would seem to hint at such a conclusion.